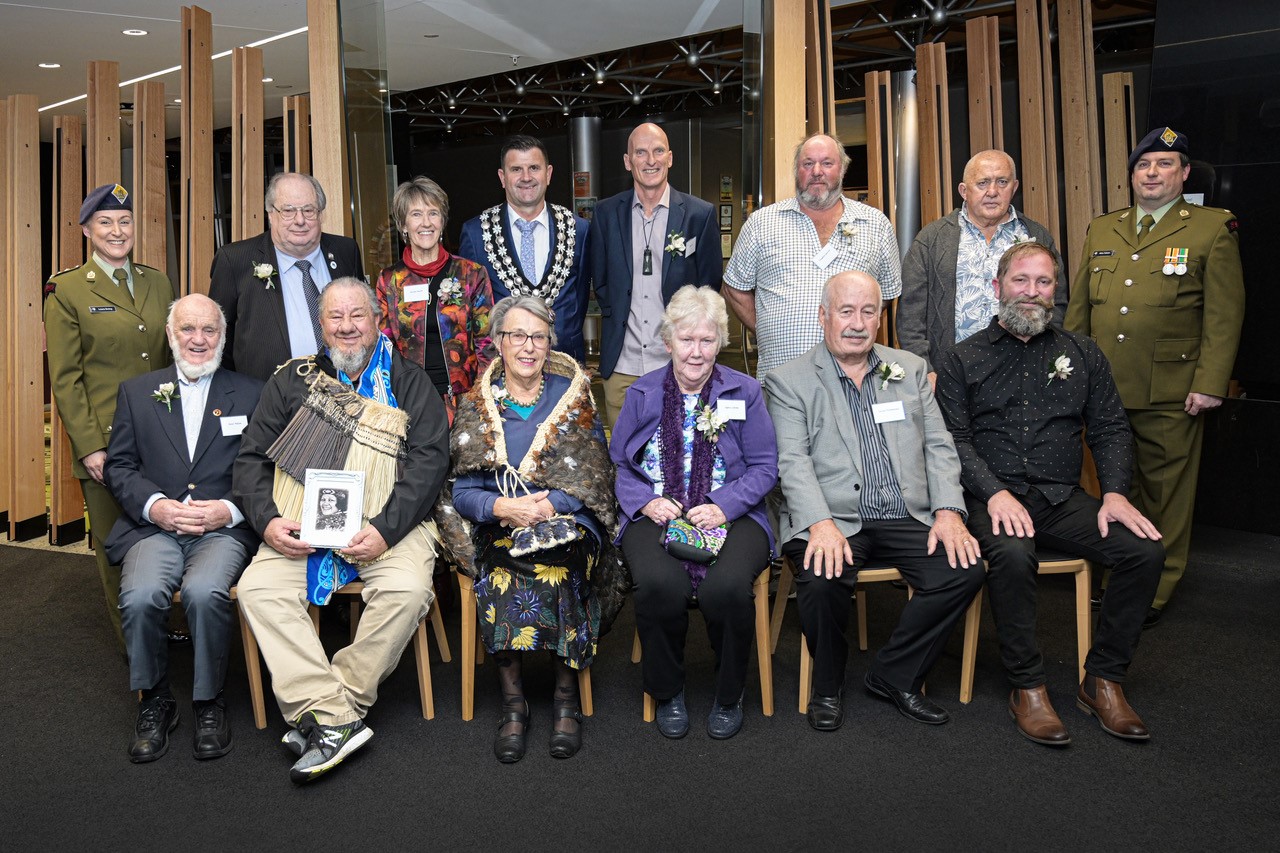 From flying sick people to hospital and providing support for seniors, children with disabilities and helping people to get fit and healthy – the efforts of this year’s NPDC local legends make impressive reading.

Established in 1979, Acting Chief Executive Jacqueline Baker says the annual awards are an important tradition, recognising the contributions of the residents of our District. Each year we call for nominations with 11 recipients selected.

“Local legends are those who work their magic to make a difference in improving the lives of those around them through selflessly offering up their time and expertise. A huge thank you from everyone for your hard work and dedication to our District.”

Find out more about our 2022 NPDC Citizens’ Awards recipients:

Jocelyn has dedicated her life to teaching music. She’s been the director and conductor of the Taranaki Youth Orchestra for the past decade; she set up and runs the acclaimed Concerto Competition; and is the Convenor of the Taranaki Schools Chamber Music Contest. She also played a key role forming the Taranaki Music Education Trust and is a trustee of the Dame Malvina Major Foundation which has donated $1 million to Taranaki musicians.

Jocelyn is known as a supportive teacher and mentor, a tireless fundraiser and a champion of musical education for young people.

Blair Cox leads the front in Taranaki’s cycling and sporting communities The 1986 Commonwealth Games silver medallist and owner of Mitchell Cycles gives his time, energy and advice to help people get on their bikes and improve their lives.

He has coached, supported and sponsored members of Taranaki Toa, set up in 2013 to encourage Māori to improve their fitness and health and take part in an entry-level triathlon. Blair also set up the Taranaki Trails Trust which develops and supports cycling and walking trails in our region.

Blair is described as having a gift for instilling self-belief in people, being infectiously positive, determined, humble, and an “all round good guy”.

David has been helping fly patients to hospitals for nearly 40 years.  In 1984 he started helping to transport patients to bigger hospitals across the country through a service provided by the Aero Club.

When the club stopped providing that service, the Taranaki Air Ambulance Trust was formed, and David was a founding trustee. In 2017 he became the trust’s acting manager and continued as a trustee. In this role, he raised $2 million to buy aircraft, build a modern hangar and concrete apron at the airport, and built the taxiway as a joint venture with NPDC.

David is described as ‘the ultimate volunteer’ who works tirelessly, gives his all and likes to stay out of the limelight.

As the president of both the New Plymouth and the national Parents’ Centre, Karen advocated for ‘rooming in’ for mothers and babies, swimming pool fencing, car seat laws, fathers attending the births of their babies, and midwives being able to work on their own.

Among other pursuits, Karen also delivered produce and meals to women supported by the New Plymouth Women’s Centre, gave toilet bags to Women’s Refuge, founded the Taranaki Multi Ethnic Council, chaired the Taranaki District Health Board Ethics Committee, and sat on a WHO compliance panel monitoring the marketing of breastmilk substitutes.

Karen is recognised for her years of service and commitment to the betterment of the lives of others.

For nearly half a century, Vaughan has been a jack-of-all trades on the surf life-saving scene. He joined New Plymouth Old Boys’ Swimming and Surf Club in 1973, where he has held a raft of positions. He also competed and served as a surf official at the district, national and international level, and won a slew of awards, including the prestigious Surf Rescue of the Year and Surf Lifeguard of the Year.

But it’s the way Vaughan gets things done, can solve any problem, fix anything broken and sort everything out that makes him respected and appreciated by those around him. He’s known for being down at the beach setting up before his competitors arrive, helping with technical organisation between his races and then later, when everyone else is winding down at the clubhouse, still being down at the beach packing up.

Terry’s knowledge and experience in the legal field mean he is well equipped to help the community as a Justice of the Peace through the Citizens’ Advice Bureau.

Terry is the Secretary of the CAB board and acts as an adviser as well as providing JP services. He has been recognised on a national level by twice being appointed Procedural Officer for the Royal Federation of New Zealand Justices’ Associations AGM. His expertise is highly regarded, and he puts it to further use in his role as the current Taranaki Association Ministerial Educator.

Agnes is the linchpin of the Grey Power New Plymouth Association The person who holds everything together and makes it work.

She joined Grey Power in 2004 and after two years as a volunteer, was made office manager in 2006. Since then, she’s been acting as a coordinator of many facets of Grey Power’s activities in New Plymouth.

Agnes has a great deal of institutional knowledge and understanding of Grey Power on an operational level. She trains other volunteers and is the liaison between the committee and the office. She also collates and compiles articles for Grey Power New Plymouth’s quarterly newsletter.

Agnes has put in many hours of volunteer work, mostly behind the scenes, making sure the Grey Power New Plymouth Association’s office runs smoothly.

Children with disabilities who live in Taranaki have access to life-changing support thanks to Craig. He set up Conductive Education Taranaki after travelling to Waikato for four years to access similar support for his son Zak who has Pitt Hopkins Syndrome.

After frequently making out-of-region trips to the nearest Conductive Education Centre for support, Craig took it upon himself to bring this specialist support closer to the children in Taranaki who needed it.

He set up a trust, gathered a skilled governance team, and fundraised, lobbied and networked so he could open the first Conductive Education Centre here in 2017. They now support 28 children, young people and their whānau.

Barry’s green thumbs and hard work are helping feed those in need. He spends countless hours tending the community garden in Waitara which provides fresh vegetables to the town’s foodbank.

For the last four years Barry - also known as Shimme – has been a fixture at the Wise Charitable Trust Community Garden. Rain or shine, Shimme can be found tending and planting, weeding, harvesting and delivering vegetables to the Pātaka Kai Waitara Foodbank.

Known for his community-minded approach and his horticulture skills and expertise, Shimme also teaches and instructs volunteers at the garden and is always ready to share his knowledge freely and let people give things a go.

For five years, Michael and Ngarongo ran housie several times a week to raise funds to build the Waitara League Clubrooms. It was only one of the couple’s many contributions to the community before Ngarongo sadly passed away in 2011.

Together, they ran housie games to raise money for Kairau Marae where Michael spent 20 years as the chairman and helped rebuild the wharekai. They were members of the Waitara Surfcasting Club and for 25 years helped with the Take-A-Kid-Fishing Day.

Michael, who has survived a brain tumour, has also managed the Waitara Bears league team; coached youth league; established the Taranaki and NZ Touch Associations; been an Owae Marae trustee; was the leading hand in building the Pukearuhe marae; the chair of Taia Fisheries, Whaitara Pahake and Pukerangiora Hapu; worked as a Land Based Training tutor providing alternative education to young people; and is the chairman of the Waitara Kaumatua Group and gets behind all of their fundraising efforts.|

Peter’s interest in the recent history of Huirangi, Lepperton and Tikorangi led him to research and write seven books detailing the vibrant rural Taranaki communities. His work is described as a significant contribution to the otherwise largely untold history of the area.

In 1998 he helped found the Bertrand Rd Suspension Bridge Trust which raised $650,000 to save the bridge from demolition and rebuild it. Peter is still Secretary of the trust, and along with Linda, unofficial keeper of the unique hardwood bridge. They visit the Heritage NZ Category 1 structure most days, reporting any issues.

Peter has been a member of both the New Zealand and Taranaki alpine clubs and climbed the mounga for the 70th time in 2014. He also spent 16 years as a St John First Response officer and was on call 24/7 in North Taranaki.