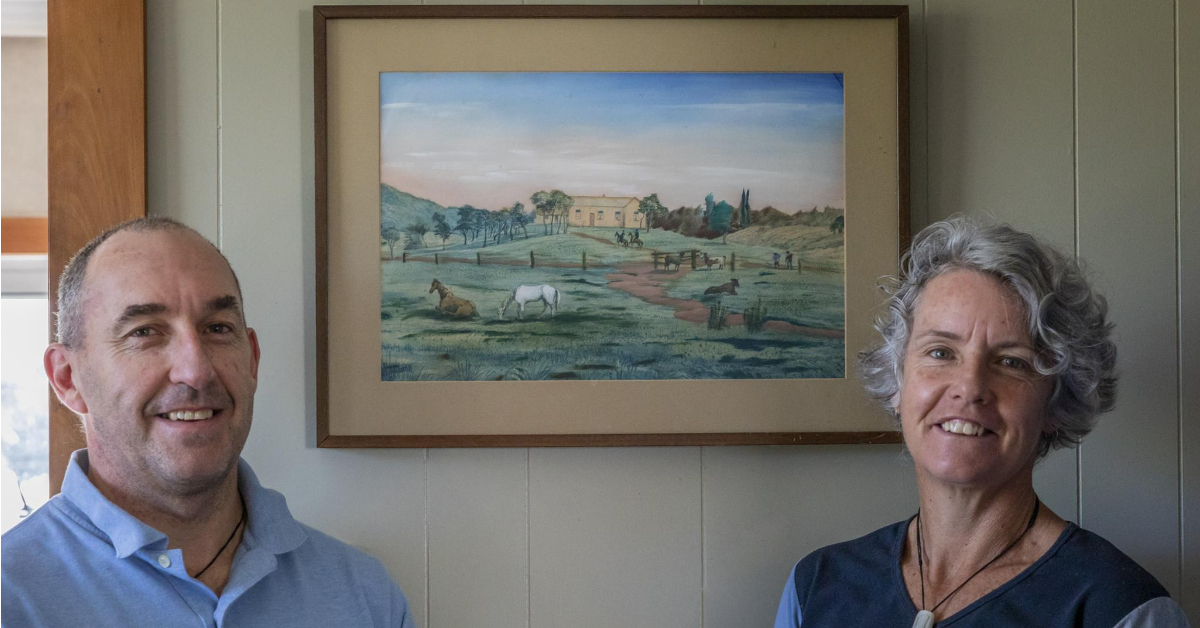 A painting with a history almost as intriguing as Christopher Aubrey himself has been unearthed in the tiny North Taranaki settlement of Tongaporutu.

The nomadic 19th century watercolourist eventually vanished from New Zealand without a trace, but was known to be in Taranaki during 1896, with his work from that time the focus of an exhibition in NPDC’s Puke Ariki Museum.

After hearing about the exhibition, Tongaporutu’s O’Sullivan family stepped forward to let Puke Ariki researchers know they were in possession of an Aubrey work, depicting the Tongaporutu Ferry House in 1896.

The painting has been proudly on display at the site of the old boarding establishment, which was a popular stop for drovers and travellers from the north when their journeys were still determined by the tides at the Tongaporutu River crossing.

Puke Ariki pictorial curator Chanelle Carrick was delighted to be contacted by Emma O’Sullivan, whose family has been connected to the region more than 130 years.

She says the Aubrey painting was lucky to survive a fire which destroyed the original Ferry House in 1937.

“For some reason it was taken down from the house and given to a family down the road for safe keeping. We’re not entirely sure why that happened but very thankful it was,” she says.

O’Sullivan’s great-grandfather, James McKoy established the boarding house with his wife Mary Jane and while the area was meant to be alcohol-free at the time of provincial prohibition, there has been plenty of evidence to suggest the law was bent a little at the elbow.

“When some of the nearby paddocks were excavated they found hundreds if not thousands of whisky bottles buried in underground trenches,” Jono O’Sullivan says.

“Whether or not that had something to do with why the painting was put in safe keeping, we can only speculate.”

While the painting has been touched up and re-framed in New Plymouth at the now closed Wayne’s Gallery, it shows a lot of the features Aubrey used in his other work depicting scenes around the district as he headed north.

“The two figures he has used in this are almost identical in the painting we have of him in Inglewood,” Carrick says.

She remains hopeful other people will come forward with knowledge of other Aubrey paintings as the exhibition, titled 1896: Christopher Aubrey's Taranaki, runs through until August 15 in Puke Ariki’s Lane Gallery.

As well seven of the nomadic painter’s artworks, the exhibition also features a number of interactive elements which are proving popular with visitors.