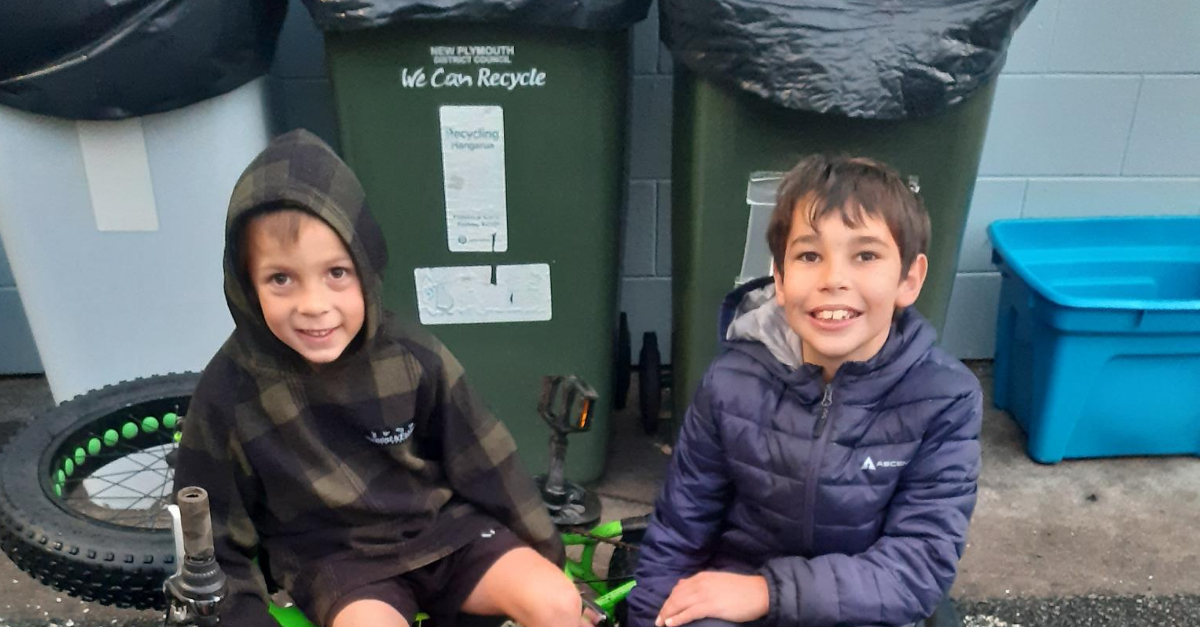 If a tidy camper is a happy camper, then two Waitara boys have been spreading the joy around the NPDC-administered Ōnaero campground.

Layne Russ, 6, and his cousin Jack Melville, 10, collected three big bags of rubbish during a sweep around the campsite, down the Ōnaero River and around the beach during a rainy day over the long Matariki weekend – and they’re keen to keep the ground tidy during their regular holidays there.

“I thought it would be a good idea to pick up the rubbish because then the animals wouldn't die from eating the rubbish,” said Layne, who plays for Clifton Junior Rugby.

Layne’s parents, Lisa Melville and Michael Russ, have been caravanning at the Ōnaero Bay Holiday Park regularly over the last 12 years and they love its classic friendly Kiwi campground feel.

“We took Layne for his first camping trip at Ōnaero at six weeks old. It’s so peaceful and even when it’s packed out, there is a really good vibe,” said Lisa.

“After being stuck in the caravan for a couple of hours due to the rain I told the boys to put their gumboots on and we would go for a walk to the river. Sadly, we spent over an hour picking up rubbish. We ended up with three bags full, a piece of large rope and a sheet of polythene.

Both boys said they’d do it again.

“I was so proud of these two boys. It wasn't a chore as they knew it was so important to look after the river and beach,” said Lisa.

The boys are role models for everyone who visited the campground, which is on Ōnaero Domain, said Michelle Kennard, Manager of Ōnaero Bay Holiday Park, which is leased by Belgarvia NZ.

“At Ōnaero Bay Holiday Park it's great to see our regular Taranaki family of campers taking time and pride to clean our beach for everyone to enjoy,” said Ms Kennard.

NPDC Resource Recovery Manager Kimberley Hope said everyone has a role in keeping our Sustainable Lifestyle Capital clean and green as a taonga for future generations.

“Layne and Jack set an awesome example for all of us, especially the grown-ups.

“Taranaki has a Zero Waste goal, so it’s important to reuse, recycle and repurpose where we can and to make sure our rubbish goes in the bin when we are out and about.  Our district's six coastal campgrounds are Taranaki gems for locals and visitors so let’s clean up after ourselves,” she said.

Caption: Layne Russ and Jack Melville with the haul of rubbish from around Ōnaero beach and campground.