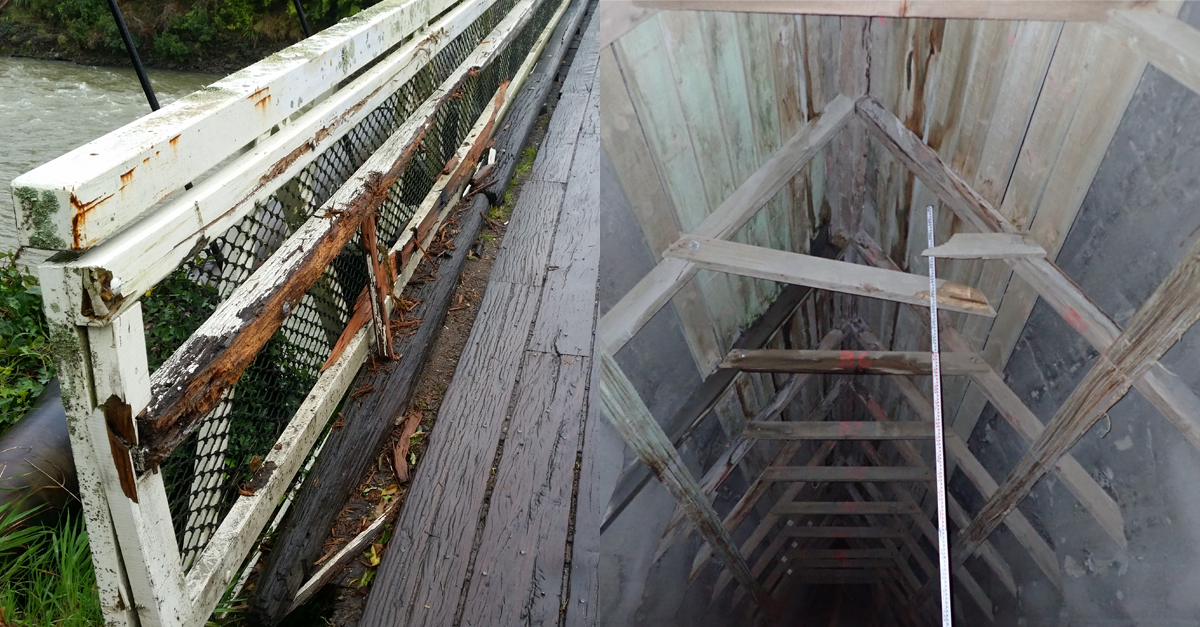 Truck and tractor drivers trying to save time by taking short cuts are costing ratepayers about $150,000 a year and making our roads dangerous for all of us.

Some of Taranaki’s iconic landmarks, such as the Urutī Tunnel and the Bertrand Road Bridge, which marked its 125th birthday this year, are being needlessly smashed up by drivers forcing oversized vehicles through them.

Some of the worst examples include:

The Bertrand Road Bridge, which was built in 1897 and rebuilt in 1927, was only ever made for cars and smaller vehicles, but regularly has large vehicles scraping their way through the bollards at either end and smashing up the woodwork on the sides and deck.

The 235-metre Urutī Tunnel, which was built in the 1920s, often has its support and bracing timbers shattered and girders bent by big vehicles.

“This sort of damage makes these roads dangerous for other drivers and costs ratepayers about $150k a year to fix. We’ve spent $60k alone fixing the Urutī Tunnel over the last two years. The repair work also holds up other traffic. And the really frustrating thing is that it’s all totally avoidable,” said NPDC Transport Manager Rui Leitao.

“We work with trucking companies to steer drivers to use navigation apps designed especially to take big vehicles over suitable roads, but too often we see them relying on standard GPS or just chancing a shortcut.

“We suspect some drivers have even climbed on top of their cabins to move height restriction signs at tunnel entrances and in 2014 a big truck actually got stuck in the Urutī Tunnel,” he says.

NPDC attempts to recover the costs, but too often the culprits are gone before the damage is reported or found by maintenance crews.

All our tunnels and bridges have signs ahead of them warning of size and weight limits.

Damage like this to Bertrand Road Bridge (right) and Urutī Tunnel and other bridges and tunnels across the district, is costing ratepayers thousands every year.