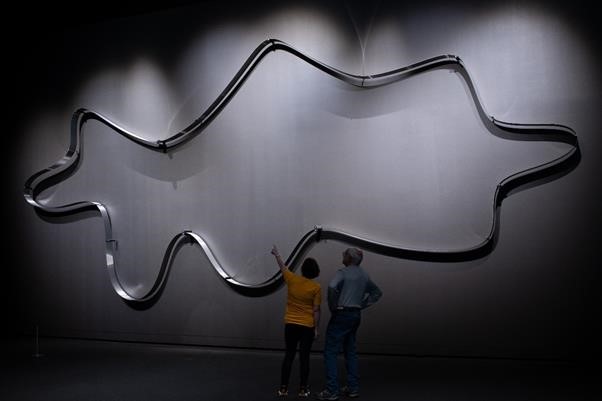 A kinetic sculpture has come to life nearly 60 years after renowned artist Len Lye first came up with the concept.

The impressive artwork consists of a 28metre loop of stainless-steel strip traveling through a series of rollers extending from a wall. It fills a gallery space spanning over 10 metres long and 5 metres high.

Len Lye Curator Paul Probbel said it was a really unique work for the artist, and one which could evoke many responses from viewers.

“Len Lye imagined the work during the 1960s and left instructions for its future construction. The Gallery has worked with the Len Lye Foundation and Team Zizz! to realise the work and those in Taranaki are the very first to get a glimpse.”

Never one to shy away from grand scale, Len Lye’s sketches envisaged the work to be about 150 metres long. At the time, he acknowledged his vision would be decades away, stating his work would be “pretty good for the 21st Century”.

Team Zizz!, a group who fundraise to develop and maintain works of the renowned artist, have to date raised money to fund three large kinetic sculptures for display at the Len Lye Centre.

“The three works represent the diverse genius of Len- from the frenzied bell chiming shimmy of Wand Dance, to the beauty of the snake-like shadows of Sky Snakes and now the mesmerising beauty of Convolutions,” she said.

Convolutions is showing to the public until 8 May 2022.