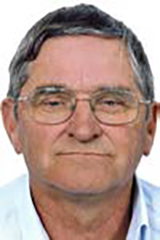 My principal place of residence is in the Puketapu-Bell Block Community Board area.

I was educated at New Plymouth Boys High School and after that spent eight years in the NZ Air Force being promoted to the rank of Sergeant. After the Air Force I worked in Local Government North Canterbury for 17 years and in 1995 moved to the New Plymouth District Council where I worked in roading and waste. I retired in December 2019.

Whilst in North Canterbury, I passed a Crew Boss course for Rural Fire and believe volunteers are needed in all areas of the community.

In 2020 I moved from New Plymouth to Bell Block, a community for all age groups and servicing a large Industrial block and an airport.

I would like to see a safer roading layout in this area especially with access to and from the State Highway. I see great potential for this community and would like to be a part of it.

No. I realise that Council has a lot of projects and maintenance to be completed however rates should take into account the cost of living and inflation to protect the community

No. I believe the NPDC is managing there infrastructure correctly and should continue to do so

Yes. Council needs to protect their infrastructure from weather events one example is the work that has been completed in the city to protect against flooding.

Yes a sector of the community feel disenfranchised by their race they should be supported in all ways necessary to assist them with their belonging to the community.

As part of the Bell Block community I support better roading with: roundabouts, cycle lanes, and walkways, including the walkway extension to Waitara.

If someone wants to travel to New Plymouth then there are two options and one is unsafe at certain times of the day.